WhatsApp is focused and adding so many new features to its messenger app. Form the last year, the leaks are coming out that WhatsApp is working on Picture-in-Picture (PiP) mode. The PiP mode was previously introduced in WhatsApp but it has a major issue. It stopped playing a video whenever switched between other apps. Now, the WhatsApp beta 2.19.177 version started rolling out to some of its beta users.

That feature was first reported by WABetaInfo blog, which reports developments and upcoming feature updates on the WhatsApp application. The Facebook-owned app developers had started working on fixing this issue or you can say a limitation. The company has started rolling out the feature to all its beta users called PiP mode 2.0 for now.

The new PiP mode 2.0 is now available in the latest WhatsApp Beta 2.19.177 version for the beta testers officially. The Picture-in-Picture mode will allow WhatsApp users to play any online or offline video like YouTube or Facebook video in the background or a separate window which can be accessible after app exit also. That means the video will play separately in a window and you can use or browse other apps simultaneously. It won’t affect your video playing experience. 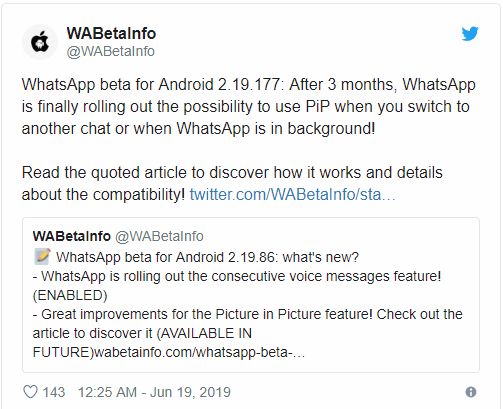 Meanwhile, WhatsApp is also working on a new feature which will prevent users to send anything (links or files) to any wrong contacts by mistake. Currently, you can see the recipient image on the left side whenever you want to share anything directly. But after adding this new feature, it will show the full name of the contact under caption to make things clear and double-checked. That will be useful for so many users. Whereas, for a long time, reports are coming out that WhatsApp will add fingerprint security in its app for security purpose. Hope that update will also come very soon.

Though the feature is in development mode and only available in beta version, it will take some time to get stable and available for stable WhatsApp version as well. We have to wait for that. Till then, if you’re a beta WhatsApp tester and didn’t get the latest update yet, download the beta APK from below.